CSA monthly dinner lectures are moving this year to the roomier UC Berkeley Institute for
Research on Labor and Employment (IRLE). The Institute has been a strong supporter of the CSA, and thanks
to their contribution, this year the dinners will be free of charge.

The Institute is located at 2521 Channing St., two blocks south of campus. There’s a UC parking lot
open to the public across the street. There is a special email announcement list for the dinners, and
if you would like to receive them, please send an email to Dolores Dillard, deloresd@berkeley.edu.
Dinner is served at 7 p.m., and please be sure to RSVP to Dolores. For other inquiries, including
suggestions for future speakers, please contact Chuck Wollenberg at cwolle@yahoo.com

Our Summer, 2008 newsletter (pdf file here) is now available. Inside find information about, 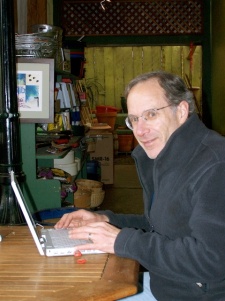 Jonathan Rowe, member of the CSA steering committee, wrote a fine article for the June 2008 issue of Harper’s on what the GDP measures: “stuff,” not people’s well-being, he says.

The article is called, “Our Phony Economy.”

“Governments have sought to catalogue the national wealth for purposes of taxation, confiscation, planning, and mobilization in times of war. They have not designed these catalogues to be measures of national well-being or of quality of life. Yet that is how the national wealth inventories have come to be used, especially the GDP. Somehow the tool has become the task.”

An LA Times editorial reported that 30% of Latinos and more than 40% of African Americans do not complete high school in California.

Howard Blume and Mitchell Landsberg gave an overview in the LA Times of the figures, the data gathering, and a hint of the political wrangling.

In early 2006, Mitchell Landsberg wrote a lengthy series of think pieces for the LA Times called, “The Vanishing Class.”

Dana Hull and Sharon Naguchi reported on the state’s data for the Mercury News and the South Bay Area stats.

Nanette Asimov gave the report for the Chronicle and included a searchable stats finder for Bay Area schools.

KQED’s Forum hosted a discussion on the issue when the reports were coming out around July 19. The discussion included an official from San Francisco Unified and state superintendent Jack O’Connell.

The California Dropout Research Project at UC Santa Barbara’s School of Education has resources and news.

The Policy Analysis for California Education at UC Berkeley published a report explaining their methods of data gathering and processing. The report is a collaboration among several of the state’s urban school districts: Long beach, LA, San Francisco, San Diego, and Fresno.

You can easily search stats at the CA Dept. of Education by ethnicity and grade.

The Public Policy Institute of California recently issued a report renewing the call for a peripheral canal that has plagued California politics and environmentalism for so long.

View video and audio of a July 18 presentation in Sacramento by two of the report’s authors, Ellen Hanak of the PPIC and Jay Lund of UC Davis.

View the PPIC report, “Comparing Futures for the Sacramento-San Joaquin Delta” with interactive maps of projected Delta flooding with and without levee repairs.

The UC Davis Center for Watershed Sciences has some good explanations and resources. Jay Lund is here.

View presentations of the state’s second strategic plan draft of the “Delta Vision.”

Search no more, PeripheralCanal.com has a comprehensive feed listing of news reports on the peripheral canal as well as great links to maps, stats, and other resources.

Kelly Zito reported on the PPIC report for the Chronicle. She lays out the 1980s north-south debate over a peripheral canal, how the debate has evolved, and what environmentalists are saying about the potential effects for fish populations.

Tami Abdollah gives a brief overview of the PPIC report with some key quotes in the LA Times blog, “Greenspace.”

Peter King reports in the LA Times on the peripheral canal in the context of the drought. 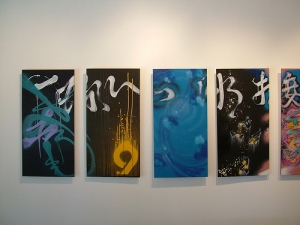 Imagine for a moment that you were a polyglot — that you could speak multiple important verbal and visual languages. Signs, symbols, colors, gestures, and images: imagine that you could read the surface of any culture perfectly.

It’s Indiana Jones’s superpower, and it’s one we have a great deal of respect for … provided it arises from deliberate study and not naturally from, say, migration or the diversity of your urban neighborhood. This is why connoisseurship of the traditional art of Chinese and Japanese calligraphy — reserved to the educated — is highly respected. This is why, despite years of mingling its aesthetics with those of “high art,” graffiti art, often the province of products of bilingual education, is still underobserved.

So suppose that you were an polyglot by nurture AND by study. What kind of art would you make?
Yeah, it’s a leading question. Obviously I’m trying to get you into the peculiar, headspace you need to be in to understand ProArts gallery’s glowing exhibition CalliGRAFFitti, a collaboration between Asian American calligraphy artist Minette Mangahas, and nine graffiti muralists. The connection between the aesthetic of ideogrammatic calligraphy and the tagging-based lettering of graffiti is such an obvious one, it’s astonishing that it’s been made so seldom before, much less to such lovely effect.

In a series of experiments, Mangahas and her collaborators (Apex, Coby Kennedy, Zen One, Toons One, Amend, Desi W.O.M.E, Denz One, and Lucha) match materials and canvases to see how harmony and counterpoint influence the effectiveness of each art form. Wooden panels are acrylic and spray-painted. Paper mounted on Chinese scrolls is ink-painted and magic-markered. An installation of cinder-blocks nearly takes flight with its even covering of white and purple lettering.

The often remarkable result recalls the source aesthetics of both forms in the expected manner, yet presents an energetic and unpredictably graceful fusion. One enormous scroll features a flight of black characters by Mangahas entangled with red tags by Apex. The aerial perspective created by the differently sized characters makes the piece look like a dogfight between armies of flying fonts.
The heavy paint on a set of paper umbrellas and a pair of flattened take-out containers are less successful, underlining the airy and gestural nature of both calligraphy and tagging. This is a collaboration that has its aesthetic limits. But within those borders there’s a nearly unlimited scope for typographic hybridity, and a melding of graph and image.

Broadening the theme of idiomatic syncretism are installations by Ken Lo and Ala Ebtekar, both local artists who combine orientalist images from their families’ cultures of origin with the hip hop culture they grew up in. Lo’s macho video fantasies about his legendary pick up game with Kobe Bryant and his reputation among a clutch of passive-aggressive friends are offset by his use of Chinese-style paper cut-outs and cardboard Chinese grille-work. Ebtekar’s series of drawings is a continuous manuscript of dancing text, bordered by a strip of dead warriors wearing the costume and uniforms of different eras of Persian fighting.

Taken altogether, the works in this show are an excellent answer to my initial question. The artists present as a many-headed polyglot, pointing out the hybrid and multiethnic nature of hip hop, American hipster culture, and the very pursuit of the artistic leading edge.

From U Penn English

Jeffers is most frequently associated with the California coast and the
ocean he so deeply loved. At the same time, his interest in the alpine
world is everywhere evident in his work. Mountains appear throughout his
poems, from the early poem “The Alpine Christ,” to the ridge line that
California rides at night in “Roan Stallion,” all the way through to the
setting of his last long poem, Hungerfield, at the foot of a “thin turfed
mountain,” and in countless lyrics. In Jeffers’ journeys away from the
ocean, he always turned to the mountains; his only poem set in New Mexico
is “New Mexico Mountain,” and his only poem set in Colorado is “Red
Mountain.” Wherever we turn in his work, mountains appear as
manifestations of nature at the same time as they suggest the richest
possible range of symbols, from Sinai to Olympus, Parnassus, Mt. Blanc,
and all that such places represent in the history of art and culture.

For its fifteenth annual conference, the Association welcomes papers that
explore any aspect of Jeffers’s interest in and representation of the
alpine environment, from geological fact to aesthetic or religious
symbol, from setting to subject, from representation to interpretation.

As usual, serious papers on other subjects and on the relation of Jeffers
to other writers, artists and thinkers are also welcome.

Proposals should be relatively brief and must be postmarked by December
15, 2008. The conference has a number of different formats and includes
opportunities for standard academic talks (15-20 mins.), longer plenary
presentations, responses to longer talks, panel chairs, participation in
discussion sections, and poetry readings.

Please address all queries and proposals directly to Rob Kafka,
Treasurer, at rkafka_at_unex.ucla.edu.